Think, the narrow tiny apartments are dullA legacy of Soviet times? No, this is a broad creative space for digital technologies. We invite you to a super-realistic virtual journey through a small package full of great ideas

Less can not happen. Not only by European standards, but also by Russian standards. A small video with a virtual tour of a tiny apartment, decorated in Scandinavian style, appeared on gaming sites and caused a storm of emotions. For the first time the game engine of the new generation of Unreal Engine 4 was used to depict the interior. It turned out so reliably that at first glance one can not believe in its computer origin. 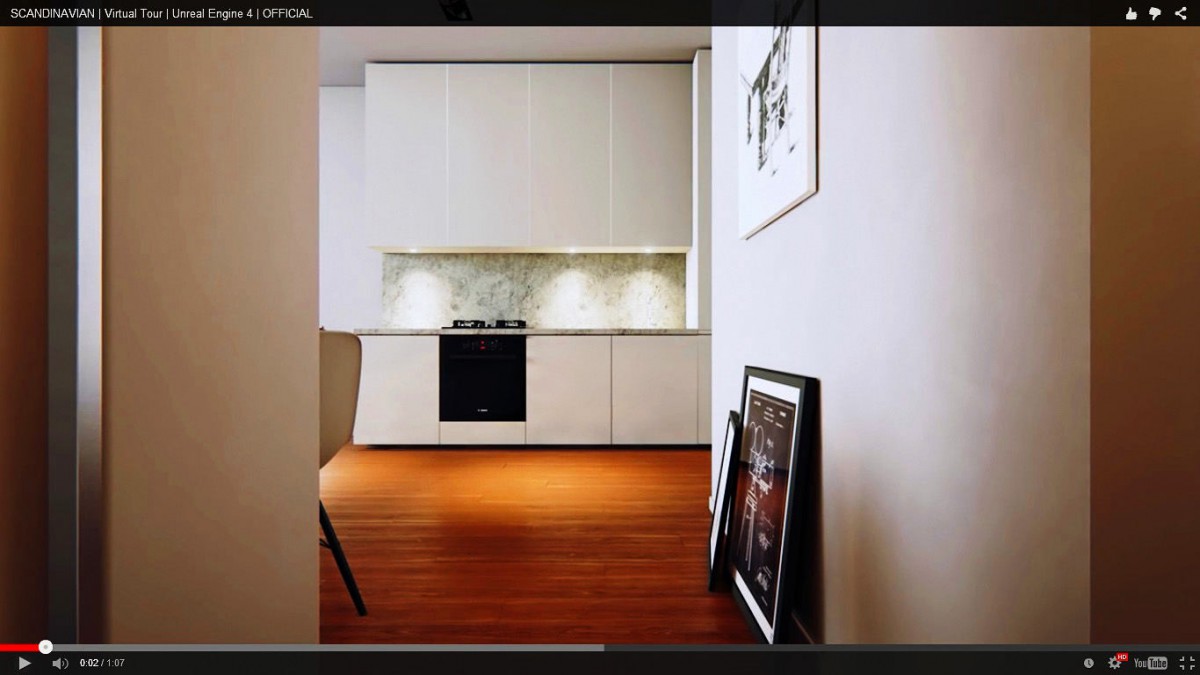 Italian Piranesi, who left behind onlyone real church and a whole library of drawn architectural fantasies, Russian "paper" conceptualists of the 80s ... If only they knew what horizons the era of digital technologies opens up for them! The author of the visualization is a Ukrainian 3d-artist, as he calls himself, Vyacheslav Serbov. Vyacheslav Serbov, 3d-artist:

- There are many prospects for this approach.Already now you can select colors for various accessories and other details. Furniture can be changed interactively. The whole apartment cannot be furnished like that yet, but the replacement of several elements can be shown without problems. Do not forget about virtual reality, for which Unreal Engine 4 is perfectly applicable. The technology allows the customer to see the future object with all the details as if he had been inside, to feel the space, to experience emotions. A completely different level of perception! cgcloud.pro Our fellow visualizers have already appreciated the fresh idea andtry their hand at using it. But, as Vyacheslav admits, the professional world - both architects and manufacturers - is just looking at the new technology. It's easier to follow the usual path of static images and animation. But perhaps a change in minds is just a matter of time. Eva Arkhipova, graphic designer:

- This is, indeed, a very promising wayinterior filing. It all depends on the architect who makes the project. Theoretically, every 3d renderer can do this already now, there would be enough patience, skills and computer resources. I think in the near future such projects will be really widespread. Now even videos of interiors are far from uncommon. And I’m sure it’s not far from virtual tours. Including very detailed and interactive features. devegital.com For the first experiment in the new genre VyacheslavI was looking for a space not pretentious, but with a mood. I liked the modest Scandinavian apartment, because this style impressed him personally. So digital fantasy has a real prototype. It's interesting that the regulars of the game forums who watched the video first became interested in it even more than the features of the application of the engine. The problem was defined as follows: "As from a small creepy hut with a bedroom slightly wider than a bed and a kitchen that does not exist at all, make a normal," patsan "apartment" (quoted in the forum shazoo.ru - Aut.). We agreed that the best option was proposed- unisex. And we agree with that. Scandinavian style gives the maximum set of tools for an extremely small area. ... There are translucent light curtains on the windows. The only "closed" space, the bedroom, is separated only by a glass partition. Nothing prevents the light from passing through the apartment-corridor and compensating for the psyche of the nightmare of a narrow layout. Due to solid facades without ornaments and even withoutThe pens look absolutely monolithic, and that's why it's easy. Upper level - under the ceiling. This is a relatively recent trend in the design of small rooms. And visualization shows how reasonable: the upstairs cabinets give an extra storage space, mask the kitchen for dining room furniture and help create the impression of a "wall extension". The only drawing is a laconic pattern of a seamless apron and table tops, apparently, cast from concrete - this emphasizes. To fit everything you need, but notClutter the dining area, use small objects with clear outlines. A compact leather sofa that attracts attention only with a semi-matt texture. Easy table and chairs in the Scandinavian spirit - designer plastic, "Viennese" chair and ekostyle. Laconic, but comfortable scenery. By the same principle, a functional floor lamp is selected: a red spot with a sharp, well-defined figure. A wooden board of dense brown color onSemi "responsible" for warmth and comfort. Walls ... Here the author decided to demonstrate the potential application of technology for the consumer. During viewing, the viewer can turn on and off the light and change the color of the walls from white to saturated coral and back. For the demonstration on the screen, the combination is spectacular. How much such a rich tone is suitable for real life in a narrow space is a controversial issue. In the end, color is a matter of individual taste and perception. To change it in reality, though more complicated than on the screen of the monitor, but still easier than changing the design of the room. Perhaps in the future we will choose our own paint, wallpaper, shape and size of furniture. One click - and a headache less! 3D video of the interior