This three-level penthouse has almosteverything: avant-garde art, its own elevator and even an oriental-style bedroom. You have never seen anything like this The owner of a three-level penthouse in the Alye Parusa residential complex is a top manager of a large company, a family man and a connoisseur of all the pleasures of life: from high art to parties with friends. The man had been looking for such housing for a long time: a large area, several levels, panoramic windows with a beautiful view from the window and a terrace. He entrusted the arrangement of the new apartment to the interior designer Stepan Bugaev, who managed to embody the concept of a modern country house in the interior, reflect all the hobbies of the owners, and also make the home cozy and at the same time able to surprise the most discerning guests. Stepan Bugaev, interior designer Graduated from Moscow Institute of Physics and Technology with a master's degree in physics and from the State University Higher School of Economics with a master's degree in business informatics. He has his own design studio, under his leadership, more than 500 design projects have been implemented. Ranked in the top 100 of the best designers, according to the leading interior publication AD. She is a teacher at the School of Design at the National Research University Higher School of Economics, teaches the author's course “Interior Design. Rules for creating a successful project ”. She gives open lectures on interior design and writes articles for leading interior magazines and portals. The inspiration for this was the view from the window of the Stroginskaya floodplain. The impressive panorama had to be adequately presented and included in the decor of the house itself as much as possible. For this, it was decided to carry out a radical reconstruction of the facade: the fences of the first and last levels were replaced with glass ones, increasing the window openings and filling the premises with light. Work on the internal space was conducted withAccount for the unusual three-level layout: the first two levels are represented by identical studio apartments, and the last is the terrace. The customer wanted each level to differ in its own design decision, which was embodied by the designers. The private zone was decorated in a restrained Japanese style, for the living room and kitchen-dining room, a bright palette and decoration in the style of the Bauhaus were chosen, and the children are pleased with the rich combination of orange and green, balanced neutral white. Stepan Bugaev, interior designer: - Unusual three-level layout allowed to equip each floor with its own special world. The first of them is the most impressive: there is a "bohemian" hallway and a spectacular living room by the fireplace, combined with a kitchen. The second level is more "home", with a children's room, a master bedroom and a bathroom. Terrace of the third level has turned into a large relax zone for parties or rest in sun loungers. And, finally, I went to a bold step and built in an internal elevator, thus raising the level of comfort to the degree of unconditional luxury. 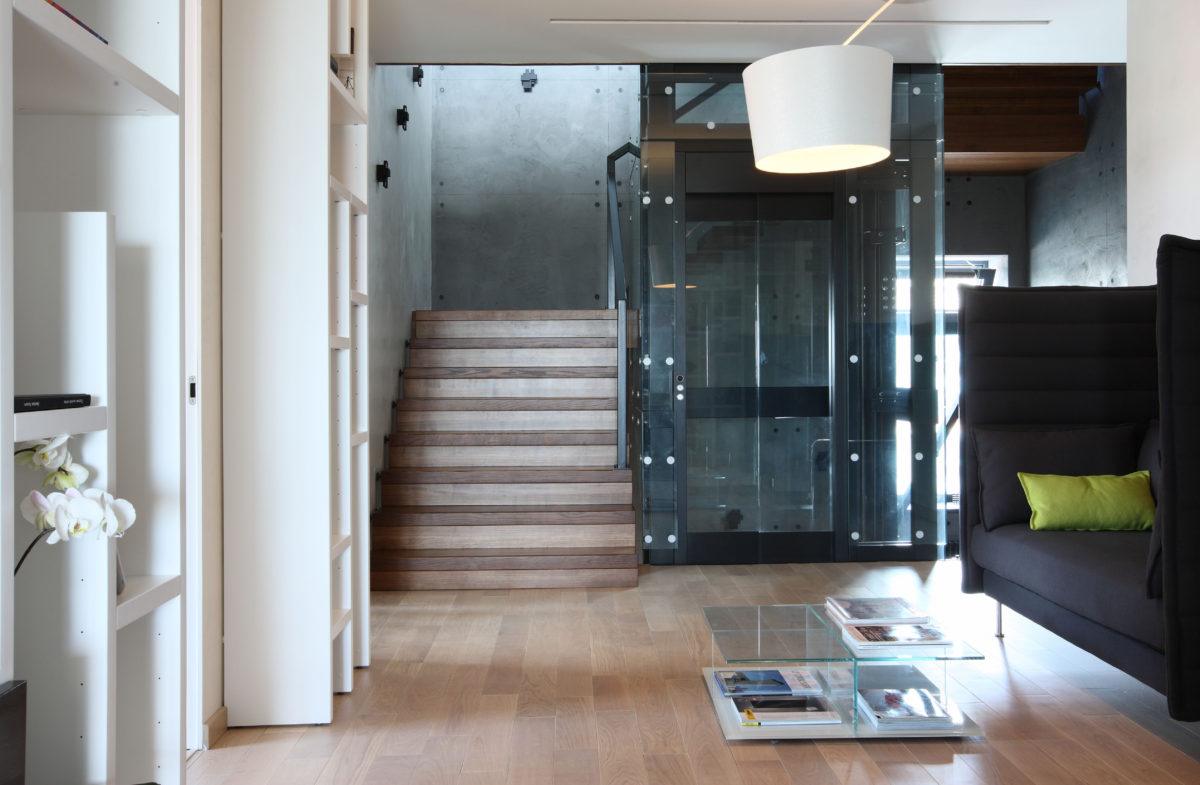 For the owner of the penthouse it was very important thatThe house was already hit with a threshold, so the hallway is framed under the influence of the great avant-garde. As an inspiration, Kandinsky's works (his reproduction decorates the doors of the cabinet) and Le Corbusier, based on the sketches of which the chair of the entrance group was created, appeared. 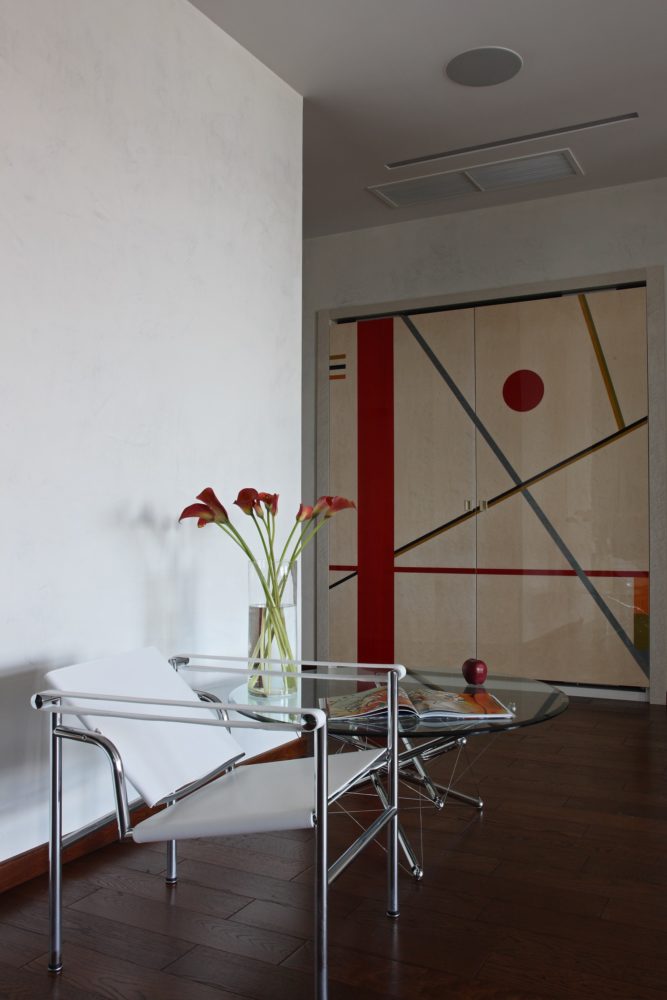 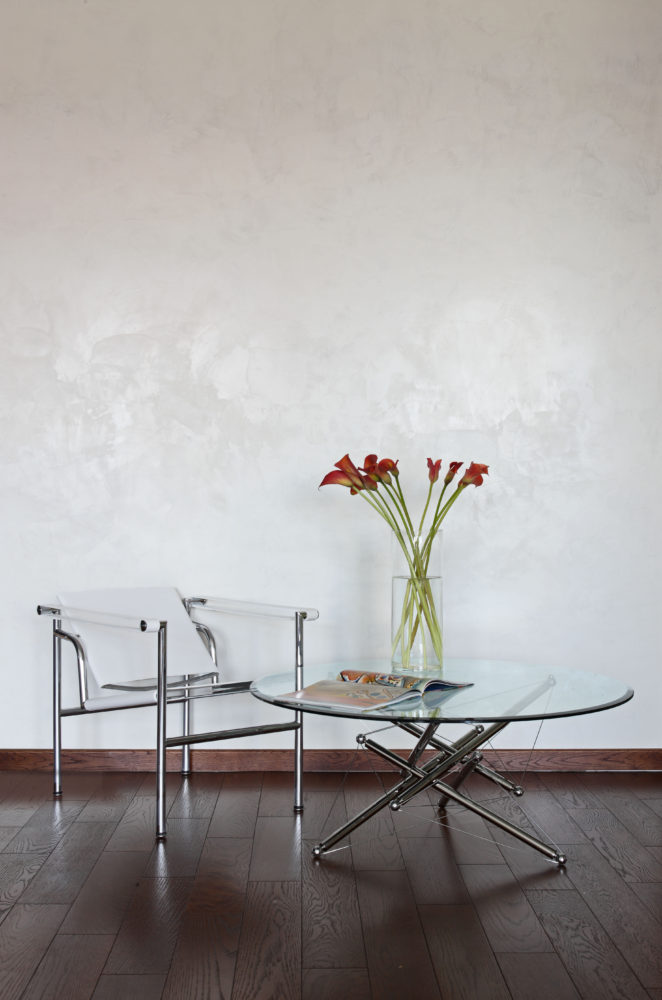 The ideological center of the house, no doubt, can be consideredThe zone of the living room, sustained in the laconic style of the Bauhaus. Particular spiciness of the interior gives a contrast of clear geometric shapes, rich color of the sofa area near the fireplace with smooth outlines and light colors of the dining group. For the kitchen they chose a concise design and a combination of white color and texture of the dark wood: so the facades simultaneously look stylish and modern and do not distract attention from the recreation area. The master bedroom and bathroom are designed inminimalistic style with light oriental notes - the result is a very calm, natural and relaxing combination. They worked especially carefully on the decor of these premises: the designers of the bureau developed sketches of furniture and interior items, and their production was entrusted to the Italian company Il loft. The bedroom has traditional furniture and Japanese sliding shoji on wooden frames and special rice paper that lets light through while remaining impenetrable to the eyes. 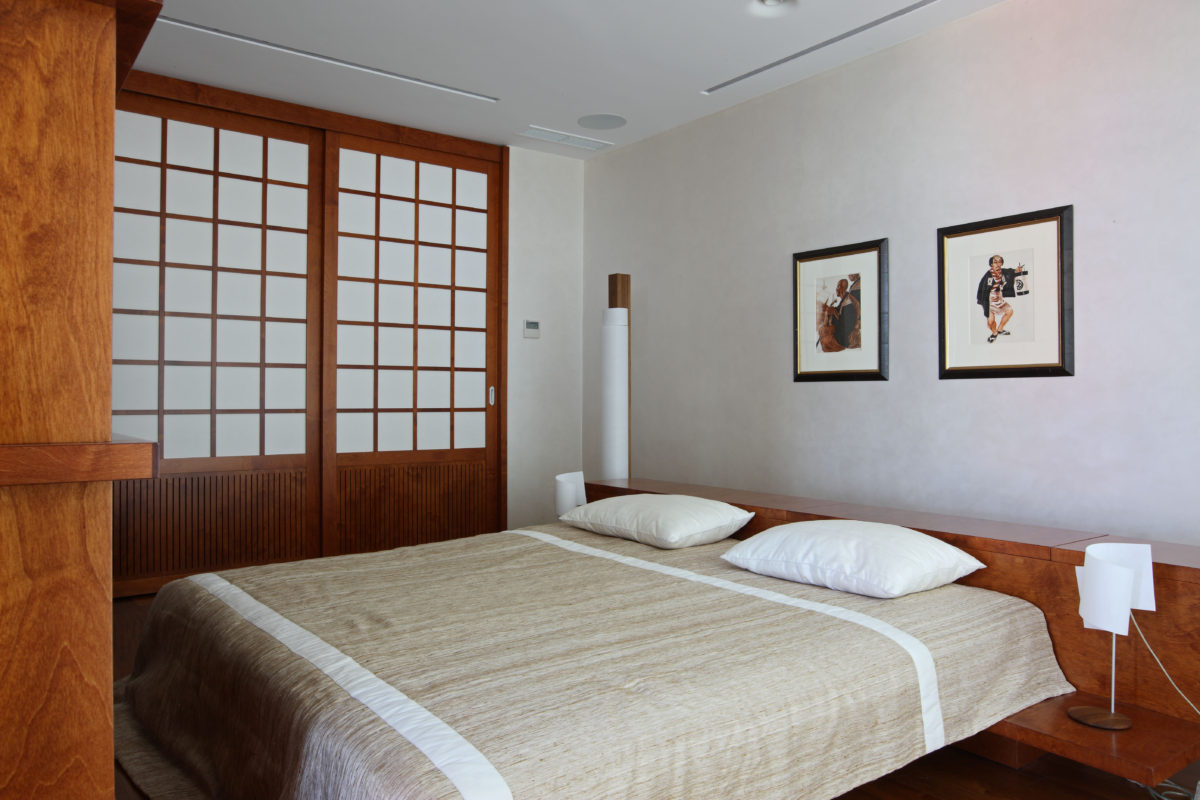 The central element of the bathroom was a window,Filling it with light. Opposite him, the Funny West bathtub of the Antonio Lupi factory was installed, to enjoy the water procedures, one could contemplate the city landscape. 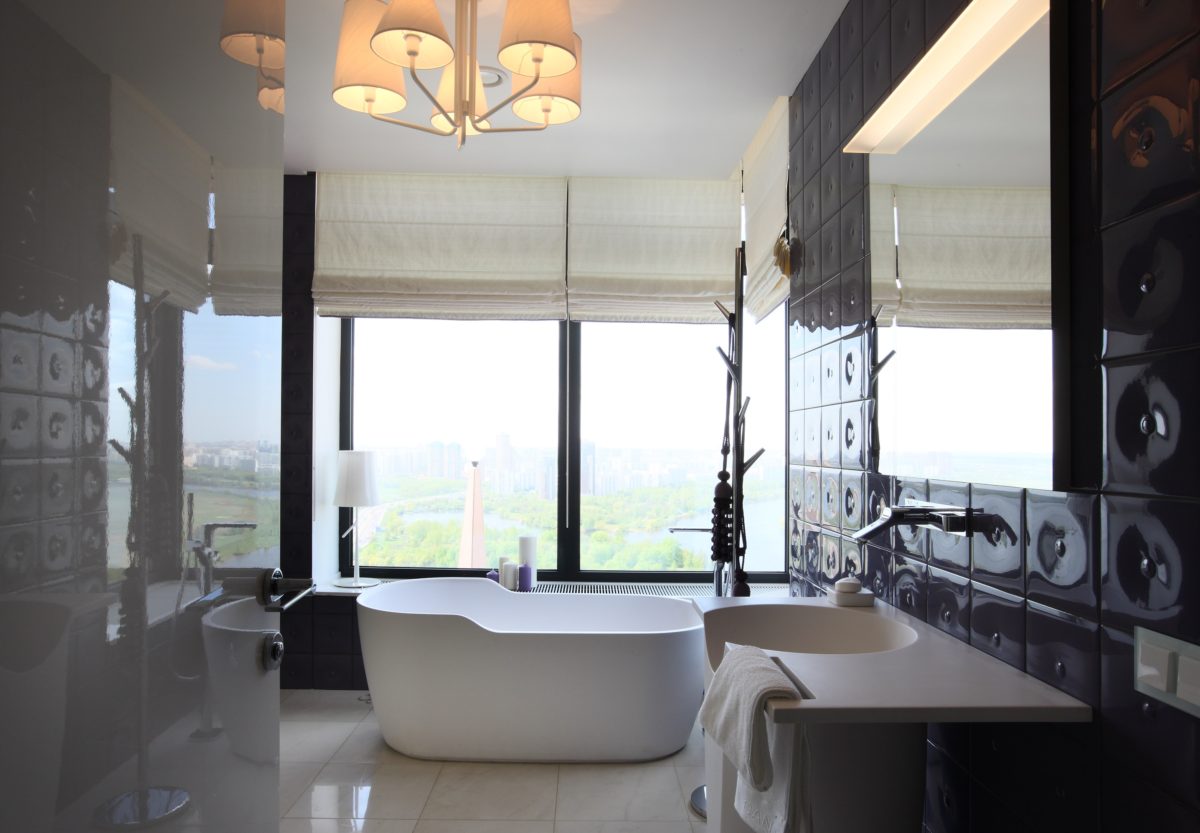 The children's room reflects a restless and mischievousThe nature of its small hosts. The main idea is a game on contrasts: the combination of green and orange, smooth, streamlined and precise rectangular shapes make the interior dynamic and at the same time balanced. In order to give children more opportunities for creativity, the corner of one of the walls was equipped with a surface for drawing, and for comfortable studies they organized a convenient workplace by the window. 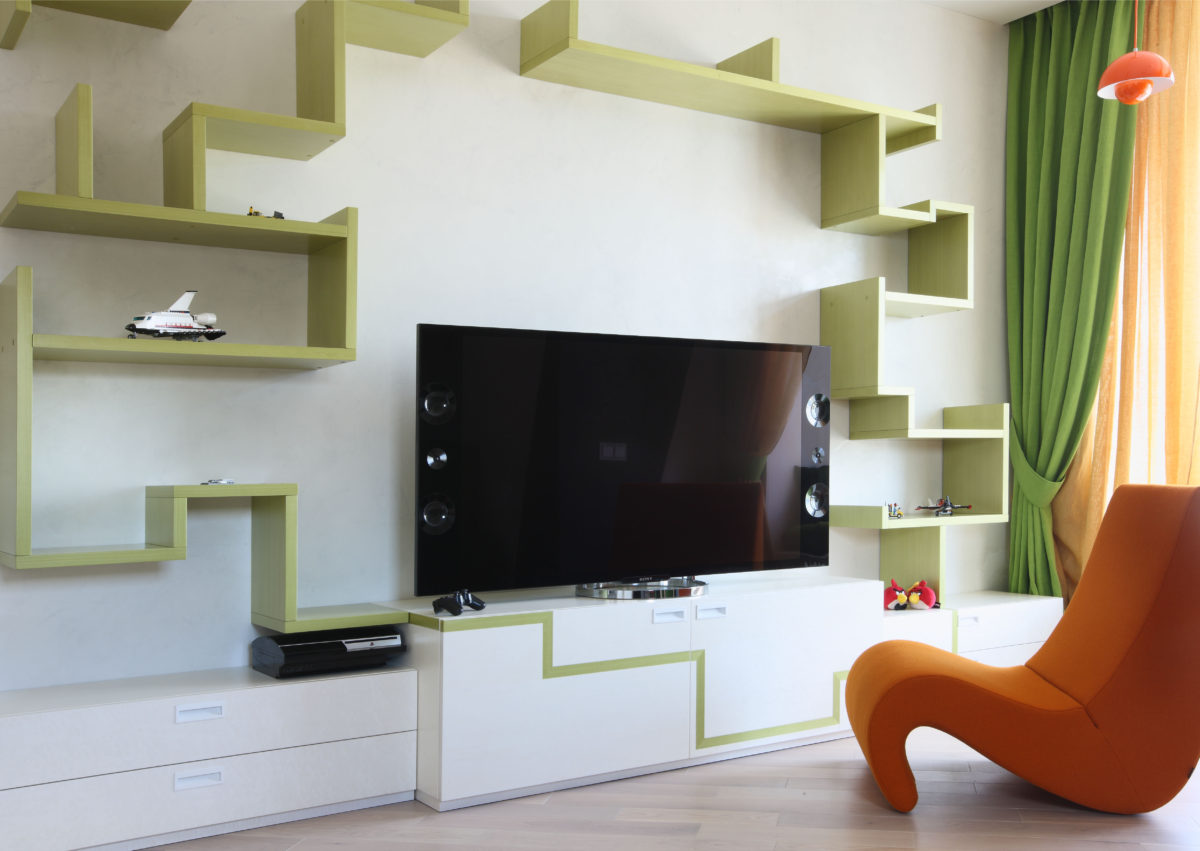 Another interesting in terms of design room -Guest bathroom. The owner wished that the bathroom was "stunning", so the designers designed it on the contrast of black tiles and kipno-white ceramics. A separate washbasin and a bathtub are equipped with unusual mixers mimi Italian factory Gessi, descending from the ceiling. In the office of the head of the family, the windows were lowered toFloor level, which gave a lot of light and a sense of spaciousness. It was decided to use elegant in its simplicity a table, an armchair and other objects of decor, the smooth outlines of which give the cabinet a special comfort. And since any work should be alternated with rest, a separate zone with a soft sofa and TV set was singled out. The rest, hidden from prying eyes, the rooms are designed in a more relaxed design.

Stepan Bugaev, interior designer:- This project turned out to be very unusual and gave an incredible scope for imagination. And it's not only about the area of ​​623 squares, but also about the customer's desire to create something impressive. I have done many technically challenging things, in particular - rebuilding the facade and equipping the penthouse with an internal lift. He worked on mixing motives of various styles: the basis was a laconic Bauhaus, seasoned with a piquant note of the East. And the ideas of the great Suprematist Kandinsky and the avant-garde artist Le Corbusier completed the feeling of extravagance. Each room has its own solution, one might even say - its own special character. But such a variety of styles does not cause a sense of chaos. The focus on minimalism and clear geometric shapes in the decoration and choice of furniture set the general rhythm, thanks to which the feeling of unity was preserved and the whole interior turned out to be harmonious. Do you want to create an interior based on contrasts? For you tips from interior designer Stepan Bugaev:

In this interior were used: Ground floor Entrance hall: